This is the demo of Furcifer's Fungeon developed by PlayWithFurcifer with Godot Engine. Current version: 0.5.2

Please leave your feedback on our discord server - bugs, balancing, anything about your experience - thank you <3 Updates will be announced there as well.

I streamed your game last week. Overall, it's a perfectly serviceable game, but has some technical issues as well as lacking an interesting hook. The music also needs some work.

While I enjoy the random aspects of the game, such as picking 1 of 3 different upgrades each level attained - this always does make an interesting choice and really kicks in the dopamine when it feels like the choice was made well - it is also a concept and idea I've seen tread a lot. The one area where these type of games can become interesting is in the rogue like elements, however as it is now, the levels are exactly the same each time, removing the fun randomness that can come with rogue likes. I'm not sure how fun this game would be after only a few runs when the player is constantly going through the exact same order of levels with only stat changes happening each run.

On the technical aspect, I would spend some time working on UI design and functionality. There are a lot of parts of the UI that are just difficult to determine what is a button and what isn't. There doesn't seem to be much of a logical flow to buttons either - for example, the space in the main menu that typically is reserved for a game title, and with art that looks like a game title, is actually the button to play the game. What a strange decision. Annoyingly, Quit is placed below all of the social media buttons as well. Typically social media buttons are placed out of the way of the main menu controls that way folks don't accidental click on them which can cause frustration. (to clarify my point here: it's not necessarily about where you have placed these buttons, it's that the UI design in general needs work.)
When in combat, it's nice having all the information tacked to the player character, except in hectic combat the player's eyes are looking at where they are aiming, they probably aren't looking at their character, thus making tracking health and dodge cool-down difficult. 2 things would fix this: 1) a sound cue. Always have redundant design. Visuals are good, but visuals and sound is best. 2) Have an on-screen HUD. If you can have an exp bar at the top of the screen, you can have a health bar and timer for the dodge on the screen.
Finally, I experienced a strange bug where the cursor wouldn't display at all. I later during the stream realized that somehow OBS was able to capture the cursor, however on my own screen the cursor was not visible at all, which unfortunately lead to a rather frustrating experience.

Finally, the music. Normally in my reviews I don't bring up music unless it's absolutely heinous. Let me assure you: that is not your music. Your music is perfect serviceable, however, I am bringing it up since you drew attention to it within your game's marketing.
While some of the writing sounds fine, the overall production sounds cheap and amatuerish. The sample libraries - especially the horns - sound like cheap sound font instruments. If they are Kontakt libraries then you likely are not making effective use of their velocity layers and articulations. The same can be said about the string library as well, though less offensive than the horns - the strings still should have more work done.
I also don't see much purpose for having "electronic and orchestra" music. The implementation in the music seems poorly conceived. It feels more like someone decided to slap cheap hop-style drums under a cheap sound font orchestra without much consideration to the actual arrangement. All of the instruments don't seem to have their own place in the arrangement beyond "well we want orchestra and drums". There is no defined role for instruments, and the "electronic" part doesn't seem to interact or mesh with the "orchestra" part.
Finally, the mix lacks life. This likely comes down to poor processing and over-reliance on very digital sounding samples. The drums sounded dry and unprocessed, the strings sounded like they were stuffed into an auditorium in a completely separate building from the rest of the orchestra. Nothing feels cohesive, and nothing feels exciting.
Consider improving your mixing abilities as well as considering what roles your instruments play (not just considering whether it's a melody instrument, but also it's place in the frequency spectrum: is it a treble lead or a mid lead?)

If you'd like to watch my experience with your game, I've linked the archive below. You can click the timestamps to jump to when I start playing your game.

Is cool games. I love it.

Very cool, loads of potential. Biggest complaint has to be the clutter same as Vortain said, you just kinda die in the late game out of nowhere due to the heavy spawn rate and enemy health. My second complaint is in a similar vein, obstacles that stop your movement can often blend into the background which can make getting stuck and ganked feel pretty bad.

I don't know how feasible it is to zoom out and increase the map size a bit. Very cool idea, excited to see where it goes!

However, the visual mess that ensues after a 6-7 laps makes it feel like the challenge dies and visual swarm that ensues on an already claustrophobic game is unfortunate.  Enemies blending with my attacks and summons.  Makes it hard to decide if my build was trash, or if I just hit a point of impossibility (I'd lean toward the former for sake of fairness).

A fun ride, but not one I want to stay on at this point in development.  I feel it could have better potential than, say, something like Vampire Survivors, but is held back by visual spam and a small screen, both of which VS handles very, very well as I think back on it.  Anyone with a visual impairment *might* have a very difficult time with the game.  But that is, of course, just my opinion and one that I formed in only a couple of hours.  If it is beloved by most others as is, then my opinion won't be useful.  But I hope it is in some way.

Look forward to future changes though in the coming months/years.  Thanks for letting us play the demo and good luck!

why would you nerf adventurer so hard?

Very very cool game. The performance is a little bad, and there's no cloud saving, but other than those minor issues. This game is absolutely amazing and I love it!

I could jam out to this music for hours. Well done

It's very fun, but the artstyle is somewhat incosistent, especially when it comes to the redhead. She has less shading than the others and she feels a little out of  place

I'm just going just say what we all are thinking. I really miss aventure. I used to be so good. So can we please have it back Furcifer?

I had lots of fun with this demo and I can't wait for the more finished version! I wish I could share my thoughts on balancing or anything about my experience but I just overall enjoyed it a lot and I'll probably love whatever you do to the game in the future. I will say that I especially liked the design and play of Sir Honkalot and Wilhelm (Britta was my least fav sorry!), and also how the stealing from Furcifer mechanic generally works out. Also I must say that the shaders are fantastic. Oh! And I love much of the item text "sometimes it wiggles when it's happy".

I had de+recompiled the game for Linux but I never once experienced any bugs, crashes, or fps drops. Game ran perfectly fine at 60 fps for the whole playthrough. My experience may not be indicative for ███████ users though.

Bap the "export to Linux" button in Godot so it's less of a hassle for me/us/them/it to play the game thx :D

lol I love ducks, such a cool game

Can you give us any info?

Plus, the FPS drops significantly the further u get into the run. It got so ridiculous to the point the red chest is the only safe-haven where it comes back to 25+ from <10; the worse I've seen was 5 before it completely crashed.

Im guessing that being a necromaster is the best?

you can check out what other people play in the leaderboard!

In the late game, my game crashed but the game was great.

is it true that there are 11 weapons and 23 equipment items?
2 normal equipments, a full fire set, a full ice set, 4 lightning  and 3 dark?
asking so i know if i am missing stuff or not

Are you guys planning to add more characters?

i play your other games too great job

awesome game, simple but with surprising depth and customization/ looking forward to the steam release.

Is there an issue running it on web browser?  Can't get it to open.

I had a lot of fun with this game. Visually I was a bit overwhelmed at the start 😅.

This game is really fun! I like how arcadey it is moving from one point to another and just levelling up is really satisfying! I really don't know what the upgrades do but I just went with the flow. Loved it and really addictive!

I said "I'm going to try it", and ended up playing for 2 hours. Good job mate!

Great shader work!
Maybe start off with a little less happening on screen at the beginning. It can be overwhelming understanding what is what for a new player.

awesome game, i love the artstyle

Very well made!! But i was hoping that the game could go harder by progressing, But i think the bosses and enemy spawns are random :(

Can't leave the tutorial area.  it asks me to "Walk into a cactus [WASD]" but there it no cactus, just a red couch.

Ran into a few issues:

you can undo this by pressing the stuck button again

Great game! However, I find that the matchstick super move is a bit too strong. it just obliterates mini-bosses and is quite strong against bosses. Maybe lower the damage a bit and make it spin around you instead of you controling it

Runs well in the browser!  I don't have a mouse wheel to change weapons, though!  Thankfully my stylus tertiary-click does the trick.  It doesn't seem clear that dashing damages enemies until you try it.  Maybe I accidentally skipped part of the tutorial or something

Awesome :) You can change the key binds in the options btw. The tooltips of the dashes say that they deal damage, we added an icon of the dash in the inventory so you can read the tooltip. 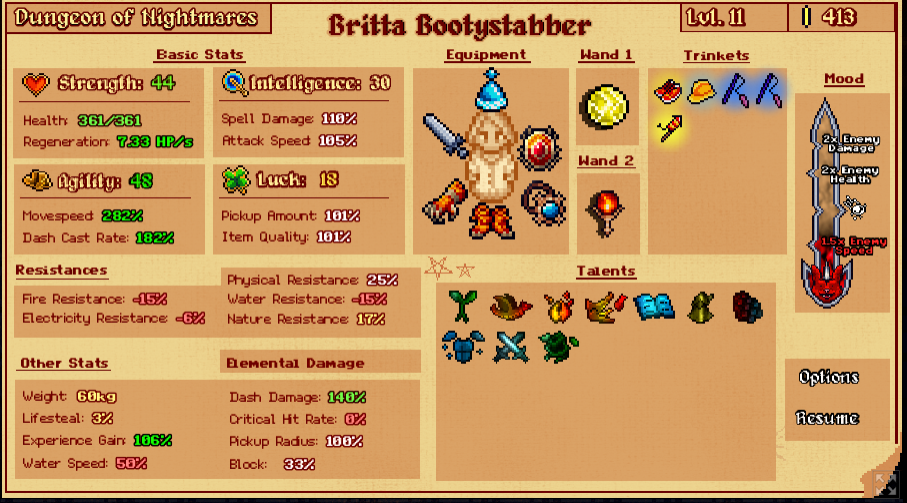 But I really liked it!  a lot of fun!

Thank you! We changed the tooltip in the latest patch to make it clearer how it stacks! 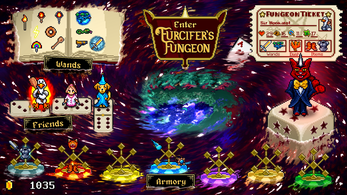 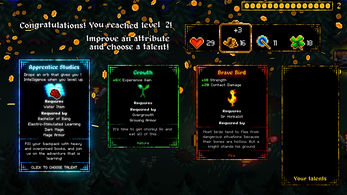 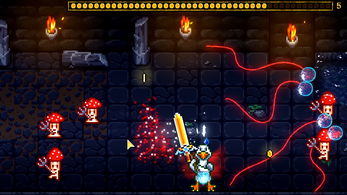 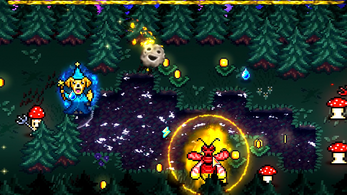